By now, everyone who comes here knows that I really like to make things simple.  One of the ways I do that is to have some make ahead meals in my freezer that we can use when life gets hectic.  Without planning ahead, we quickly resort to fast food runs to solve the nightly dinner dilemma.  Without leftovers, this often leads to buying lunch the next day.  One week, a hectic life, without planning ahead, resulted in spending $259 on take out.  That is more than  twice what I allocate as a weekly grocery budget for my family of four.

I have previously discussed ways to cut out take out including making some home made convenience foods to keep in the freezer.   Traditional once-a-month cooking means spending hours in the kitchen standing over a hot stove assembling meals.  The meals are then placed in the freezer for us to draw upon when things get busy.    Because the once a month cooking methods can be so time consuming, I often fill my freezer with homemade “convenience foods” by making larger portions of food and freezing the leftovers.  This works well for things like spaghetti sauce, lasagna, chili, and stews, but some nights, our dinners aren’t things that freeze well.  I was really happy when I found a post over at Six Sister’s Stuff that promised 8 Slow Cooker Freezer Meals in an hour. 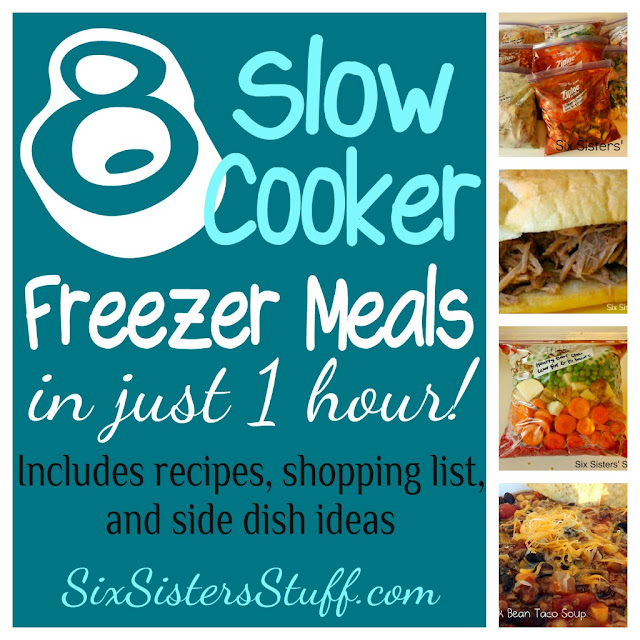 The above is the image I saw on one of their posts.  I couldn’t resist clicking on it.  Eight Dinners in one hours?  Is it even possible?  I had to try.  The really cool thing about their site is that they even had a printable shopping list as well as printable recipes. If you click on the picture, it will take you to their site and the specific post.

Lists in hand, I went through my pantry and marked off the things I already had on hand and headed out to the store to buy the rest.  Shopping was a breeze, and I didn’t really come in too much above my usual budget for the weeks groceries.  I actually spent $60 more than I had allocated for my weeekly groceries, but I didn’t mind because I knew that the freezer meals wouldn’t all be eaten in one week.  I was purchasing  groceries for future weeks, so it was okay that I borrowed from future weeks budgets.

When I returned home, I discovered that a pipe in the  backyard had burst and necessitated the water to the house being turned off.  Of course, I didn’t learn this until I had carried in my first heavy load of groceries.  This was definitely not good.  I needed running water to wash my hands while I assembled tme meals.  I needed a solution.

My oldest son lives 4 miles from me.  He likes to cook, so I quickly put away all of the  groceries except for the ones that I was going to use to make my freezer meals.  These items were loaded back into the car along with the things on the shelf that I already had on the shelves that were necessary to make the 8 freezer meals.   I drove to my son’s house and took over his kitchen.  I was midway through the assembly when I realized that I had forgotten ketchup and the fresh cilantro.  I had to drive back home, get the things I forgot, and drive back to his house.   I took a few of the already assembled dinners back to my house and stuck them into my  freezer.

Forgetting those few things allowed me to check on the repairs  to my water line.  Baker’s Man was making great progress with the pipe repairs, and  it looked like I would have running water by dinner time.   I was a happy camper.  It took me 2 1/2 hours including travel time to finish assembling all 8 of the freezer meals.  I believe that if I had been in my own kitchen and not had to drive the 8 miles round trip, we would have been done in a little more than an hour.

The freezer meals have served us well, but we need to anticipate when we want to cook and eat them because they require  a full 24 hours to thaw in the refrigerator before we can put them in the crockpot to cook.   Overall, this has worked out well for me because I can usually anticipate a crazy day.  We liked almost all of the dishes, but will make a few changes before we make them again.  My family likes really bold flavors.

They  loved the barbecued ribs with some extra bbq sauce added at serving time, and black bean taco soup.  They complained about the french dip sandwiches needing a bit more flavor.  The next time I make these, I will probably add either garlic or onion to the consomme to liven it up for them.  Overall, I would say that these are worth making.  The important thing to remember when making crock pot dishes like this is that the raw meat will release cooking  juices and fat which then dilutes the flavor of the sauces.

Go visit Six Sisters Stuff.  Try out their recipes.  They have several make ahead meals or freezer meals posts.  The site is full of great resources.

2 thoughts on “Make Ahead Meals”