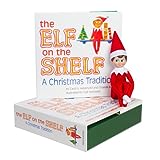 I know that Christmas is over, but I just have to weigh in on something that I noticed for the first time this year.  Elves on Shelves have been popping up in my friends homes. Click on the picture which came from amazon.com to be taken to a listing of Elf on the Shelf that can be purchased for about $30.  I’m not an Amazon affiliate at this point, so I get nothing from your purchases.

I thought the Elves on Shelves were just cute little holiday decorations, but one of my friend’s children enlightened me.  According to my 7 year old source, the Elf is a scout elf that the family adopted.  They named him Myron.  She told me that once the elf is named by the family that adopts it, the magic is activated and the elf comes to life every night after the family goes to sleep.  He then flies to the north pole through elf magic and reports to Santa whatever happened during the day.  It’s a cute idea, but I thought Santa was all knowing, so why did he need elves on shelves?  Wouldn’t it make things easier if all the elves were working in the toy shop?

After discussing the Elf on the Shelf  with several other friends, I found that there were differing opinions about them.  One of my friends had very strong negative feelings about the Elf on the Shelf.   She went on a rant about how creepy it was to have this voyeuristic Elf sitting around watching you all the time.  I though she might be joking, but a few days later, she sent me a text message containing this picture. “This is what should be done to the Elf on a Shelf” was the accompanying text.  I thought this was a bit harsh, but it turns out that the Elf on the Shelf is frequently found in some strange circumstances.  Motley News recently featured an article about the Elf on the Shelf being water-boarded and various other memes.  In fact, the photo above is featured in that article.

It’s interesting that people feel so differently about the Elf on the Shelf.  Some people love him, and others hate him.  I’m not passing judgement.  I  just wanted to share what I’d learned.  I do have one opinion though.  I’m betting that the water boarding household didn’t get a positive report delivered to Santa.